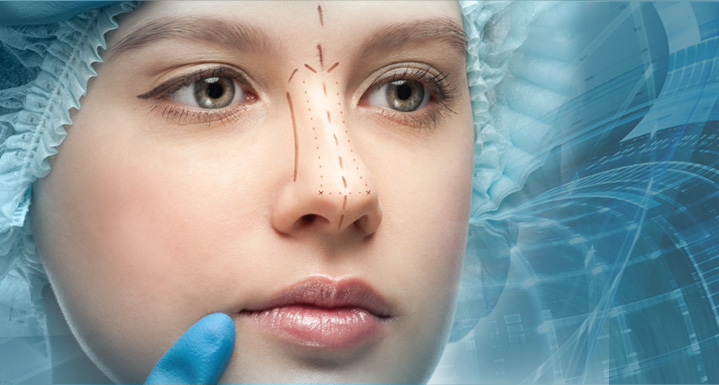 Rhinoplasty, or nose surgery, is one of the most common plastic surgery procedures performed today. It can reshape, reduce or augment a person's nose to achieve facial harmony with normal movement during speaking and facial expressions, and keeping the nose in line with the gender, age and personality, as also to boost self-confidence. It may be performed as a reconstructive procedure to correct a birth defect or an injury such as a broken nose.

Rhinoplasty may be performed for functional rather than cosmetic reasons as well. In that case we use the term “functional rhinoplasty”. Combining nose reshaping with septoplasty or endoscopic sinus surgery can effectively treat certain breathing problems, such as those caused by a deviated septum.

The surgery will improve respiration if any difficulty existed before or preserve it when it is normal.

The first - functional – is the work inside the nose for better breathing, better support of the nose bone( osteochondral) and taking cuttings.

The second - the aesthetic – is the operation on the external part of the nose in order to change the shape, size and proportions which will lead to a nice nose that will suit and beautify the person.

There are many different possible stages of surgery. Each patient is unique and the appropriate combinations are selected depending the case.

Usually 1-1.5 hours and extremely rarely in cases where taking of many cuttings from other areas is needed, like in Uvulo-Palato-Faryngoplasty,duration may reach the 2.5 hours

Discharge 6 hours after surgery. In combination with other operations such as Uvulo-Palato-Faryngoplasty the patient leaves the clinic next morning.

Is the surgical operation painful?

No, by using the right surgical technique, pain after the operation is negligible, either we are talking about the first surgery or the revision one. Of course, the same stands for the removal of the inner packing, which using new methods proves to be very slight and the whole extraction painless.

In order to make this serious matter clearly understood, it’s useful to say that in a tonsillectomy it’s unlikely to assure lack of pain without the use of painkillers, because of the fact that sensitive areas are being injured –that’s why we provide patients with them- while in rhinoplasty the proper surgical plan goes through non sensitive areas and that’s why painkillers are not being prescripted not even after the surgery.

After what age could someone have a rhinoplasty?

Does the sex really play a role in this?

For how long does the swelling stay on the face?

Swelling and little bruises are nowadays traced only in the area of the nose, they usually are very slight and within two weeks time they vanish.

After how much time are the final results obvious?

After how much time could the functional result considered as final?

The next day of the surgery and after removing the inner pack without any pain the patient can normally breathe again. The result in the functionalism of the nose is permanent.

When is the patient ready to leave the clinic?

The very same night, very rarely the morning after.

What kind of supervision does the surgeon retain after the surgery?

After the surgery, with the presence of the surgeon the inner pack should be extracted the next day, as also the removal of the external splint within a week.