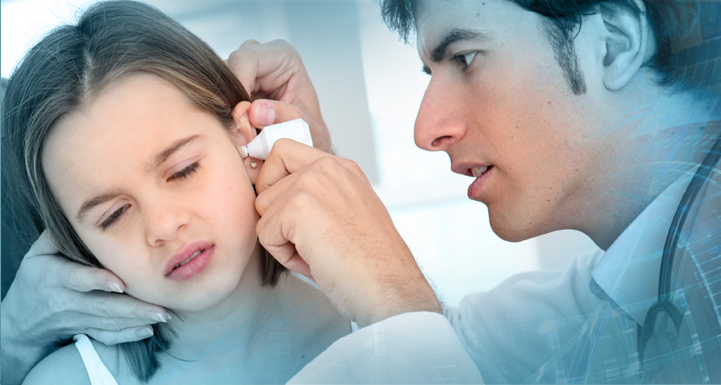 For the right functioning of the ear, it is important that a balancing system between the middle ear (behind ear-drums) and the pressure caused by the environment works properly. The system is based on the eustachian tube, which is a tube that starts from the back of the nose. In the same area appear the adenoids. In case of hypertrophic adenoids their size is bigger than usual, they press the “valve” which shuts down, the mid ear cannot communicate with the back of the nose, by extension with the environment, negative pressure is being produced (“sucked inside”), fluid gathers behind ear drum, which gets thicker and thicker (Otitis media with effusion - OME) leading to loss of hearing and permanent damages. Solution can be given be removing the hypertrophic adenoids, with combination with ear drum incision and suction of the liquid or by placing ear tubes in order to give time to the middle ear mucous come back to its normal functioning. The ear tubes “fall” alone depending on their type in 6-18 months. Special care should be shown to avoid the entrance of dirt or water, as long as we have the air tubes, in order to avoid the development of an otitis due to the fact that the “hole” of the tubes is the entrace for bacteria.

Discharge 6 hours after surgery. In combination with other surgeries, as tonsils removal discharge is given the day after.

Immediate result. Air tubes have been placed which can be easily ascertained by the patient who can watch the operated area on video the day after surgery

Depending the disease there can be combination of the following operations: Adenotomy, tonsillectomy or ear tubes placement. In kids we don't perform a nasal septoplasty or lower nasal concha cauterisation except from really rare occasions (for example incapability of eating, growth delay etc)

Ask the doctor
Print email us